What is a Rajah quilt?

Posted on March 3, 2018 by waquiltersblogboss

Do you sometimes hear the names of quilts or quilt blocks and wonder how they got their name?  Kerry Moore who attends the Rajah quilt group, kindly sent me some photos and provided me with some information, about the Rajah Quilt.  Thank you Kerry.

This quilt was sewn by women convicts on board the ship Rajah which left England in April 1841 and arrived in Van Diemans Land (Tasmania) on 19 July the same year. The women had been provided with sewing packages containing fabrics, needles, threads and scissors by women who looked after them before the ship left and taught them to sew. They sent the quilt back to England on the ships return voyage to show the ladies of the committee that they had not forgotten their assistance and had been industrious. The original quilt was 325 cms x 337 cms. The reproduction is 170 cms square. It was not seen or heard of again till 1987, when it was found in a private collection in Scotland. It was purchased by the National Gallery of Australia and can now be seen on display there.

There is also a Rajah award and each year, Expertise Events recognises Australian quilters with three special awards, presented at the AQC Gala Dinner. The awards are designed to acknowledge people who have made an outstanding contribution or achievement in the area of quilting.
In 2007, Lessa  Siegele, received the coveted Rajah Award, which prompted her to make her own version of the iconic Australian quilt. Whilst the original  is held in the National Gallery of Canberra and is 126” square,  Lessa’s quilt is 63” square, and after many requests she wrote to the gallery and with permission has written a pattern. The pattern, which she still sells, has been very popular both here and in the USA. (2sewtextiles) and is pictured below.

The Rajah group had its second meeting today and it seems some Rajah followers have done a lot of inspired work with their blocks.  Within the group, we  have a huge variety of styles that are being made in this quilt reproduction.   Kerry has also been giving small demonstrations in the making of lots of half square triangles quickly.

The Rajah group meets at the George Burnett Leisure Centre, once a month on the fourth Thursday of each month, 12-3 pm.  It is for members who are interested in the historical Rajah quilt. We are reproducing the quilt in our own way, following the design of the original but using our own choice of fabrics and ideas.
Contact Glenda Olesen for more details. Her number is: 93975543. You are welcome to join any time.

Last week we had the first meeting of the newly formed Night Rajah group. They are doing much the same as the day group but it looks like we will have some very modern quilts from this group. This group meets at the business home of the Strawberry Thief on the third Friday evening of each month.
You can also join this group if you can’t make the daytime one. Contact Meg Hutchinson for more details: 0408448554. 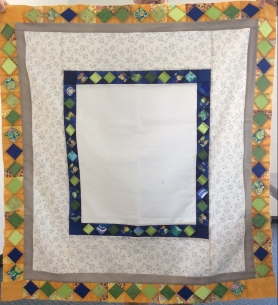 I wonder what will go in the centre of this one? 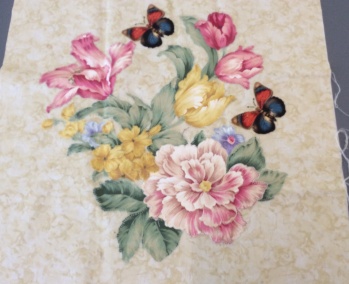 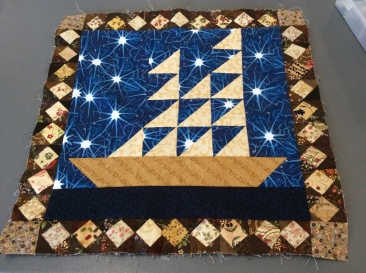 This entry was posted in Groups, WAQA Quilters. Bookmark the permalink.

This site uses Akismet to reduce spam. Learn how your comment data is processed.